Alberto Ginastera: it’s almost like Argentina did not exist before him, at least music-wise, and that after him only Astor Piazzolla (who by the way studied with Ginastera for a period of time) incarnates the music of his country, otherwise reduced to bare tango. However, Ginastera is the greatest Argentinian composer and the musical shape of Argentina would be utterly different without his presence.

Born in Buenos Aires in 1916, to a Catalan father and an Italian mother, Ginastera completed all his studies in his home country and in 1941 became a composition teacher at the conservatory. His first works as a composer date back to the early 30s, but most of them were destroyed by Ginastera himself, almost obsessed in making sure only his best works would survive. 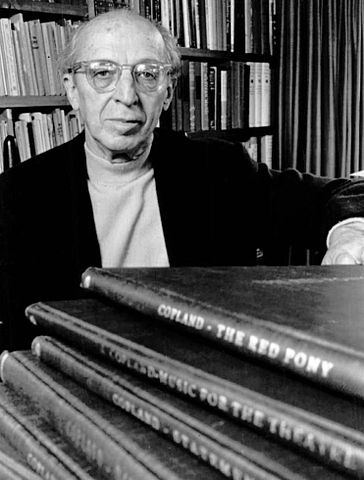 A strenuous opponent of Peron and his politics, in 1945 he was removed from his post at the conservatory and fled to the United States where he studied with Aaron Copland at Tanglewood, the “place-to-be” for a composer: Tanglewood had been the summer home of the Boston Symphony Orchestra and in that time saw the presence of another giant of the classical music world, Leonard Bernstein.
Ginastera then traveled all over the United States and Europe. He moved back to Argentina in 1955 and became very active in promoting musical education: he founded the La Plata conservatory, was president of the Arts and Science department at the University of Argentina and a proud member of several academies and institutions. Eventually he left his country again, moving to the US in 1968 and then to Switzerland in 1970, where he died a few years after, in 1983.

Ginastera himself did most of the work in cataloging his own music, dividing it in three main periods:

To compose, in my opinion, is to create an architecture…In music, this architecture unfolds in time…When time has past, when the work has unfolded, a sense of inner perfection survives in the spirit. Only then can one say that the composer has succeeded in creating that architecture.
Alberto Ginastera

This first period of his composing life is characterized by the folk music of his home country: the key elements of the pre-Colombian culture, the dance rhythms, the traditional folk themes are reworked by Ginastera with the same mindset used by Stravinsky, Bartok and De Falla.

All three of them had a great influence in Ginastera’s approach to folk music. The Argentinian dances for piano and the five Argentinian folk songs for voice and piano belong to this period.

The “Subjective Nationalism” period will last until 1958: the American influence and the Copland school definitely left a mark on the composer, who reworked the tradition in a more personal and innovative way. An example of his music from this period is the Concerto for Harp (1956).

“Neo-expressionism” is the term used by Ginastera to define his last period as a composer, eclectically open to different influences, up to the micro-tonal school. The rhythms and key elements of Argentinian folk music are still there, but they become symbols and fade away in the more abstract concept of his compositions. An example of this is the guitar sonata (1976), famous for the use of the “natural chord” (obtained by playing at the same time all open strings). Another example can be found in the Orchestral Suite “Popol Vuh” (1975).

Ginastera’s art extended to the theater as well, with four operas (Barabba, Don Rodrigo, Bomarzo and  Beatrix Cenci) and reached out to the world of rock music: legendary keyboard player Keith Emerson met him in 1973 in Switzerland to present him his arrangement of the fourth movement of the first piano concerto; after listening to it Ginastera paused for a few seconds and then commented with ‘tremendo’. Poor Emerson thought Ginastera despised the arrangement, but his wife intervened explaining how ‘tremendo’ in Spanish can be translated ‘terrific’.

Ginastera’s music has never ceased to be appealing, both to musicians and to audiences. Albert Hoffammann was stating this already in 1984 in the Sunday Chronicle and, since then, the only thing that has changed has been the growing fame of this wonderful composer.

Alberto Ginastera: a research and information guide by Deborah Schwartz-Kates