Born in 1887 in Rio de Janeiro, Brazil, Heitor Villa-Lobos learnt to play various instruments (cello, clarinet, piano and guitar) from his father, an amateur musician. The historical period in which he was born had a great influence in his compositions: slavery was abolished in 1888 and with the end of the Empire of Brazil in 1889 European influences were abandoned in favor of local styles.

Travelling around the country with his family, Villa-Lobos picked up on different folks nuances from all of the regions of Brazil: something he would carry with himself during all his life. He started studying at the National Music Institution only in 1906 and a few years later, in 1915, he presented his first compositions in Rio, to a very mild acceptance. 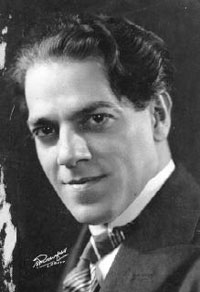 An indomitable spirit, he left home at 18 to flee from his mother’s pressure of becoming a doctor, travelling the Country again and digging deeper into folk music as well as in Richard Wagner, Johann Sebastian Bach and Giacomo Puccini.

After a few years of studying and composing, he gained his biggest fan in the great Polish pianist Arthur Rubinstein who tried to help him as much as he could, playing his music anytime it was possible. Unfortunately, not everyone shared Rubinstein’s enthusiasm for Villa-Lobos’ music: most of the composer’s fellow citizens did not show much appreciation for his works; in 1922 Villa-Lobos performed original compositions at a festival on modern art to a mocking audience; right after that, his “A prole do Bebe”, performed by Rubinstein, was loudly booed.

He finally decided that it was time to move elsewhere and find a country that would appreciate his talent.

Which better city to move to for a young artist than Paris? Villa-Lobos came to the French capital in 1923 with some 2,000 published compositions. The European period, which would last until 1930, brought him relationships with some of the best artists of the time, from Copland to Picasso to Stokowsky and his music became more and more popular on the stages of all Europe.
In the 1920s, Villa-Lobos also met the Spanish guitarist Andrés Segovia, who commissioned him a guitar study: the composer responded by writing a set of twelve such pieces, each based on a tiny detail or figure played by Brazilian itinerant street musicians (chorões), transformed into an étude that was everything but merely didactic.

Villa-Lobos described them as “a new form of musical composition“, a transformation of the Brazilian music and sounds “by the personality of the composer”. The idea of the Chôros expanded soon enough way beyond the études for guitar to reach the full orchestra form.

The first European performance of Chôros No.10, in Paris, caused a storm: Le Monde Musical described it as: “art to which we must now give a new name.”

I don’t use folklore, I am the folklore

While he was in Brasil to conduct a series of concerts, the 1930 revolution struck the country and, as all monetary funds were frozen, Villa-Lobos was forced to remain. He adapted quickly to this situation by arranging concerts around São Paulo and by composing patriotic and educational music.

In 1932, he became director of the Superintendência de Educação Musical e Artística (SEMA): his duties included arranging concerts of public interest and he took the chance to organize the Brazilian premieres of Ludwig van Beethoven’s Missa Solemnis and Johann Sebastian Bach’s Mass in B minor alongside Brazilian compositions. His position at SEMA led him to compose mainly patriotic and propagandist works.

His series of Bachianas Brasileiras were a notable exception – combining the forms and nationalism of the Chôros, and add the composer’s love of Bach. The pieces evolved over the period rather than being conceived as a whole, some of them being revised or added to. They contain some of his most popular music, such as No. 5 for soprano and eight cellos (1938–1945), and No. 2 for orchestra of 1930 (the Toccata movement of which is O trenzinho do caipira, “The little train of the Caipira“).

They also show the composer’s love for the versatilities of the cello, both No. 1 and No. 5 being scored for no other instruments. The transformation of Chôros into Bachianas Brasileiras is demonstrated clearly by the comparison of No. 6 for flute and bassoon with the earlier Chôros No. 2 for flute and clarinet.

The dissonances of the later piece are more controlled, the forward direction of the music easier to discern. Bachianas Brasileiras No. 9 takes the concept so far as to be an abstract Prelude and Fugue, a complete distillation of the composer’s national influences.

Villa-Lobos eventually recorded all nine of these works for EMI in Paris, mostly with the musicians of the French National Orchestra.

After Vargas fell from power in 1945, Villa-Lobos was able, after the end of the war, to travel abroad again: he returned to Paris, and also made regular visits to the United States, UK and Israel. He received a huge number of commissions, and fulfilled many of them despite being diagnosed with cancer in 1948.

He composed concerts for piano, cello, classical guitar (for Segovia), harp (for Nicanor Zabaleta in 1953) harmonica (for John Sebastian, Sr. in 1955–6).

Other commissions included his Symphony No. 11 (for the Boston Symphony Orchestra in 1955), and the opera Yerma (1955–56) based on the play by Federico García Lorca.

He was commissioned to write the music for the film Green Mansions starring Audrey Hepburn and Anthony Perkins, commissioned by MGM in 1958. After some controversy MGM decided to use only part of Villa-Lobos’s music in the actual film, turning instead to Bronislau Kaper for the rest of the music. From the score, Villa-Lobos compiled a work for soprano soloist, male chorus, and orchestra, which he titled Forest of the Amazon and recorded it in 1959 with Brazilian soprano Bidu Sayão.

In June 1959, Villa-Lobos alienated many of his fellow musicians by expressing disillusionment, saying in an interview that Brazil was “dominated by mediocrity“. Even so, his death only 4 months later was marked as a major civic event. He is buried in the Cemitério São João Batista in Rio de Janeiro.