Miloje Milojević is one of the most important and prolific composers in Serbian history. Along with Petar Konjović and Stevan Hristić, Milojević represents a generation of composers who introduced modern elements and complex technical levels to Serbian music. 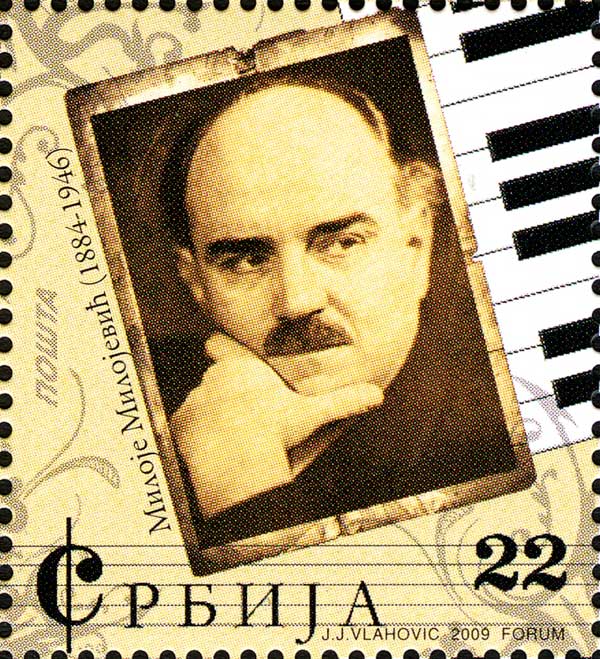 Born in 1884 from a family where music was part of every day life, Milojević took his first piano lessons from his mother.

The beginning of his career was however not in music: after studying philosophy (while keeping his pace at the Music Academy), he served his military duty for the Kingdom of Serbia in 1910-1911.

The onset of the First Balkan War in 1912 kept him in the army and his stay was of course prolonged by World War I. During this entire period he remained involved with music, both in composing and performing.

In 1919 Milojević returned to Belgrade where his music career flourished: he was a composer, but also a musicologist, a music critic, a pedagogue, a conductor and a folklorist. He relentlessly worked in multiple capacities for 20 years, when World War II changed everything. Arrested by fascist authorities in 1941, his house was demolished by the 1944 American bombing and he was left wounded. His health conditions deteriorated quickly and he died in 1946.

Keener to small forms rather than big orchestral frescoes, Milojević was greatly influenced by the music of Richard Strauss in the early stages of his career. An even bigger influence came from the French impressionism, which he was exposed to during his staying in Paris, having been sent to the Committee for Cultural Affairs from 1917 to 1919. Later on, while working on his dissertation in Prague, he became acquainted with Czech avant-garde composers.

All of these influences left a mark in his compositions, at one stage or another, but the constant of his life remained the folklore music of his country. As a folklorist, he explored, transcribed, and interpreted musical folklore of Kosovo and Metohija, Macedonia, and Monte Negro, reaching the stunning number of 900 transcribed melodies.

Some of his most famous compositions are set for voice and piano, like Bells, The prayer of mother Jugović to the evening star and Japan.

Milojević was less prolific in the orchestral music genre, staged or otherwise. However, particularly interesting are his suite for string orchestra Intima (1939)  and his ballet Le balai du valet (Sobareva metla), written in 1923 on a surrealist text by Marko Ristić.

Miloje Milojević: a life in music

Composing did not represent Milojević’s only musical activity: he was the first Serbian to hold a doctorate in Musicology. After his dissertation in Prague and centered on Czech composer Bedrich Smetana, he continued writing: his study entitled Music and Orthodox Church was groundbreaking in the research of Serbian church music toward comparative disciplines such as music Byzantology and Oriental studies.

From 1922 to 1939 he taught history and theory of music at the Belgrade University School of Philosophy. In 1930 a Seminar for Musicology was founded at the School of Philosophy and Milojević became its first director. An extraordinary speaker and lecturer, Milojević attracted a great number of students at his university courses. The Belgrade Faculty of Music Library stores his unfinished textbook on music history.

Extremely prolific as a music critic, he published over a thousand critiques, studies, essays, treatises and reviews. He wrote for the most important newspapers of the time: the Serbian Literary Herald and Politika. In his writings he approached events and issues on older and newer European music, presenting a certain critical position and driven by his passion of divulging knowledge.

An enthusiastic defender of the Slavophil and Yugoslav ideology, he never allowed himself to let his ideas rule over the objectiveness of his writing: his various essays on music by national contemporary composers were, at times, extremely critical and his evaluations became part, later on, of Serbian musicology.

His legacy, classified and catalogued, is kept in the family archives of Milojević’s grandson, academician Vlastimir Trajković, composer and Professor of Composition and Orchestration at the Faculty of Music in Belgrade.

A selection of songs by Milojevic is part of our project My Name is: Woman.

Aleksandar Vasić: The Essay Genre in Serbian Musicography of the First Half of the 20th Century: The Case of the Serbian Literary Magazine