Puccini A to Z – N as in Nomellini 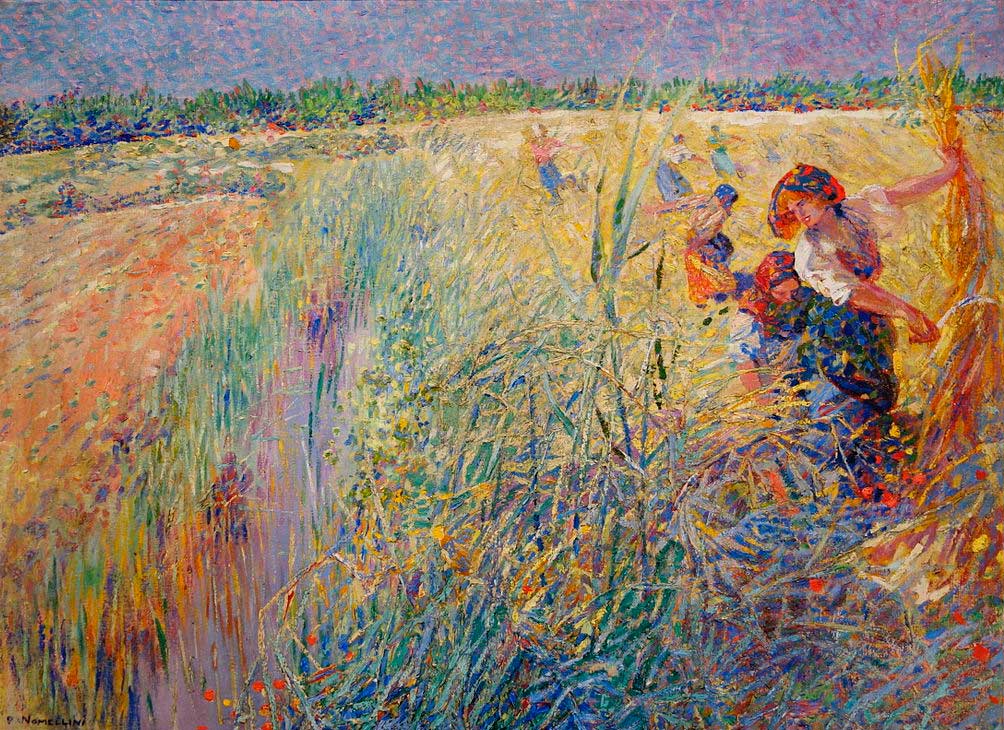 Nomellini and the “lake painters”

In June 1891, Giacomo Puccini moved to Torre del Lago in a modest house he would eventually buy in 1896 with the first rights of La Bohème, making it the graceful, modern home that is now a museum. Torre del Lago was then a small countryside village counting 300 hundred souls: a strip of untouched and quiet land fairly close to Viareggio, Pisa and Lucca.

Torre del Lago was a microcosm in itself: a place where time was passing slowly, rich of the colors of nature and away from the unnecessarily restless life of the city. Puccini found his Eden to heal from the passing of his brother Michele (who had died in Brazil of yellow fever) and to feel inspired to compose.

He was not alone: Torre del Lago was home to painter Ferruccio Pagni who shortly became one of Puccini’s closest friends. Pagni managed to gather a number of other painters to the town on the lake: all of them poor, like Puccini when he first moved there, and dreamers. They shared a love for the environment, the landscape, art and, above all, bonding activities like hunting and drinking. In this atmosphere, which with ups and downs lasted for some twenty years, Puccini wrote masterpieces like Manon Lescaut, La Bohème, Tosca, Madama Butterfly and La fanciulla del West. It was the Club La Bohème. 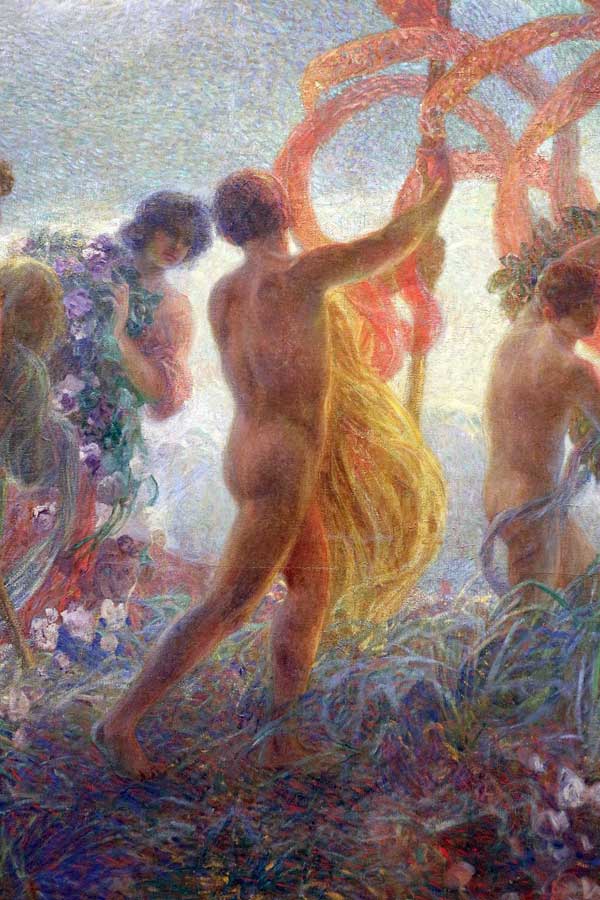 The Club La bohème was born way before the opera: it was not so much of an intellectual gathering, but more of an excuse to hang out with friends and goliardicly spend some time together.

Among the first artists who took part in the activities of the club there were Ferruccio Pagni, Francesco Fanelli, Angiolo and Ludovico Tommasi and Raffaello Gambogi; they were often accompanied by a bunch of local hunters. They set their home in the shoemaker shack.

When the shoemaker left to seek fortune in America, they bought his shack, wrote Club La Bohème on the roof and kept using it for a few more years.

The club attracted artists from other cities, as well as having a regular coming and going of non-resident people. Plinio Nomellini was one of them: Pagni had met Nomellini in Florence and introduced him to the Club. In the 1890s though, Nomellini wasn’t yet living in Torre del Lago and his presence at the club’s evenings wasn’t regular. Despite his coming and going from Torre del Lago, Nomellini formed an enthusiastic friendship with Puccini, which was only to become stronger in the following decade.

As Puccini’s fame and international engagements grew, he was forced to leave his beloved Torre del Lago for longer periods of time. And so did his artist friends. Eventually, the club died down and the artistic life moved gradually to the nearby city of Viareggio, where, among others, Nomellini had moved his residence. 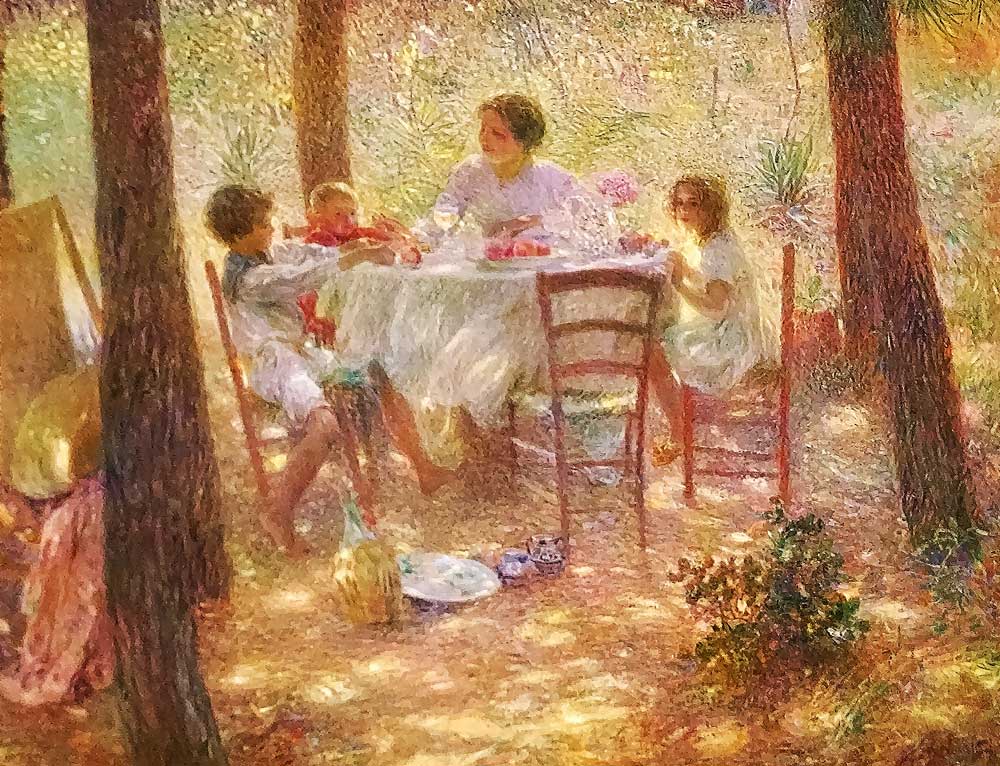 Peasants with haystacks, sun, and shade on lakes, grapes, strays of light: it’s the golden period of Plinio Nomellini (1866-1943), one of the most original Tuscan painters. Nomellini studied in Livorno and in Florence, where he had as teacher and mentor Giovanni Fattori and bonded with the macchiaioli painters Silvestro Lega and Telemaco Signorini.

In 1890 he moved to Genoa: a convinced anarchist, he began alternating in his paintings rural subjects to social ones. One of the most interesting figures of his time, Nomellini shortly started to attract the interest of other painters, like Angelo Vernazza and Eugenio Olivari, forming a very lively cultural circle called “Gruppo d’Albano”. Arrested in 1894 for taking part in anarchist meetings, he spent his time in jail painting fellow inmates.

In 1902 he moved to Torre del Lago: club La bohème was still active, though with less frequent sessions, and Nomellini became a close friend to Puccini. Not only: he had often soiree with some of the most known artists of the time, such as Gabriele D’Annunzio, Eleonora Duse, Galileo Chini, Lorenzo Viani, Giovanni Pascoli and Grazia Deledda. In Tuscany, Nomellini’s style shifted towards symbolism and in 1907 he took part in the creation of the “Dream room” at the Venice Biennale, where he had been guesting since 1899. In 1909 he participated in the Paris Salon d’Automme along with Llewelyn Lloyd and Benvenuto Benvenuti.

Nomellini became a Mason in 1914 and moved to Florence in 1919. In the 1920s, Nomellini became a fascist, which, naturally, had repercussions on his paintings: for instance, the painting title “Incipit nova aetas” (The beginning of a new era) shows the camicie nere (the fascist militia) coming to Florence. However, his first love for natural scenes kept accompanying him: to this specific purpose, he set up a studio on the Elba island, where he could focus specifically on landscapes.

His works can be seen in major Italian museums, at the Ravenna Academy, in the Chamber of Commerce of Genoa and Livorno.