Puccini A to Z – Suor Angelica

A as in Suor Angelica

Suor Angelica is a one-act opera on a libretto by Giovacchino Forzano and, with Il Tabarro and Gianni Schicchi, is part of the Trittico. A trittico is a word of Greek origins, initially used to describe a painting or a sculpture divided in three parts. It then became used in other forms of art as a synonym of trilogy. 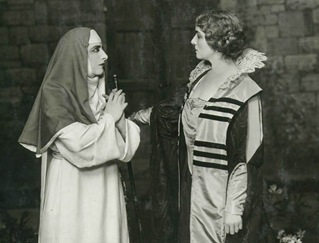 Farrar and Perini in Suor Angelica, 1918

Suor Angelica was premiered on December 14, 1918 – six years before Puccini’s death – at the Metropolitan Opera House of New York with Geraldine Farrar, Flora Perini and Minnie Egener and as main interpreters and Roberto Moranzoni on the podium.

Inspiration is an awakening, a quickening of all man’s faculties, and it is manifested in all high artistic achievements

It’s one of the few operas in history to only cast females characters. Suor Angelica was Puccini’s favorite of the operas of the Trittico: his writing for title role is unique, with melodies moving in simple steps rather than big dramatic leaps. Angelica is a victim of the events and, in his eyes, an angel by nature and by name.

Puccini asked for help with some Latin words to a his friend Pietro Panichelli, a Dominican friar who had already helped him with Tosca. In a letter dated May 1st, 1917 he wrote: “I’m writing a claustral or monastic opera. I need several Latin words for it. My knowledge doesn’t go as high as yours“. Moreover, Puccini had a sister, Iginia, who had entered the Agostinian order in Vicopelago, a small town near Lucca: she was one of the first to hear the opera, performed at the piano by Puccini himself.

The European premiere came, on January 11, 1919 at the Teatro Costanzi in Rome, the very same theater that had seen the premiere of Tosca back in 1900. Gino Marinuzzi (1882-1945) was conducting with Gilda Dalla Rizza, considered Puccini’s favorite soprano, singing the title role.

For her, Puccini added the aria Senza mamma, ought to become the most famous aria of the opera. As Julian Budden notices in his book “Puccini: his life and works”, this aria was followed by another one, the Aria dei fiori (Flowers aria), “listing the flowers from which Angelica intends to brew a deadly potion. This ‘aria dei fiori’ is one of Puccini’s boldest harmonic ventures in which tonality is virtually suspended. Most sopranos omitted it from early on, including Gilda Dalla Rizza, despite Puccini’s pleas to the contrary”.[1]

The aria was completely removed from the opera in the definitive edition.

The action takes place in a convent in late 1600.

Suor Angelica (soprano) has been living for 7 years in a convent where she was sent by her aristocratic family for having had a child without being married. The scene opens on some everyday aspects of life in a convent: the sisters sing hymns, they have recreation in the courtyard, the Monitor scolds two sisters. They rejoice in it being the first of three evenings in each year when the sunset light strikes the fountain, turning its water golden. Remembering Sister Bianca Rosa, Sister Genevieve suggests they pour some of that golden water on her tomb.

As the nuns begin to discuss their own desires, Suor Angelica claims to have none. But the sisters start gossiping, knowing that Angelica’s true desire is to hear from her family, none of its members having visited her in seven years. News arrive that a grand couch is waiting outside the convent and the Abbess announces the visitor, Suor Angelica’s aunt.

The woman, who manages the family wealth after the death of Angelica’s parents, explains that Angelica’s sister is to be married and that Angelica must sign an act renouncing to any inheritance. Angelica replies that she cannot forget the son that was taken from her seven years earlier. As her aunt informs her glacially that the child is dead, Angelica signs the document and collapses in tears.

Devastated, Suor Angelica decides to take her own life by drinking a poison made with the flowers picked from the convent’s garden. After drinking the poison she realizes that she has committed a mortal sin, damning herself to be forever apart from her son. Begging for mercy, she sees the Virgin Mary surrounded by light and accompanied by a celestial music. the Virgin Mary, as a sign of forgiveness, appears with Angelica’s son who runs to embrace his mother.

There are quite a few remarkable recordings of Suor Angelica on the market, starting with the great one from the Teatro dell’Opera of Rome with Tullio Serafin on the podium, in 1957. The following is by no means a graded list, rather a chronological one.

Suor Angelica was Puccini’s favorite opera from the Trittico; he once said “I would willingly trade all of Gianni Schicchi for a single note of Angelica“. He was greatly upset when the opera was omitted from a Covent Garden performance in 1920 to cut the evening short.

Naturally, a great deal of friends and acquaintances spoke over the years about Puccini, his life and his works: in this video Giovacchino Forzano (1884-1970), Puccini’s friend and librettist, shares some memories of the composer, Puccini’s passion for hunting, his recipes, and, among other things, the genesis of Suor Angelica.

The full libretto in Italian with English translation can be found at this page.

I’ll leave you with the most famous aria from the opera, ‘Senza mamma’, sung by the great Renata Scotto. Enjoy!