“God told me to only write for the theater, and so I did” – This statement by Puccini is only partially true: while his success and fame are certainly due to his operatic works, there are some minor and not-so-minor compositions that were not destined to the stage.

This orchestra prelude was written by Puccini for an end-of-the-year test in 1882 at the conservatory in Milan. While most critics recognized the originality of some melodies, practically all of them labeled it as an immature attempt to this form, borrowing too much from Wagner and Ponchielli.

Filippo Filippi, one of the most influential critics of the time, found it a tad too long, adding to it that the music wasn’t really going anywhere (article on “La Perseveranza“, July 17, 1882).

From left to right: Alberto Franchetti, Pietro Mascagni and Giacomo Puccini in 1885 [1]

Another critic on “La Lombardia” writes that “Puccini in this Prelude for orchestra appears a bit unbalanced, restless, a bit too Ponchielli-like […]; however, it gives evidence of an eminently artistic nature. The last part of the Prelude is very rich and elegant”.

The Wagnerian influence is quite evident, drawing from Lohengrin and Tannhäuser: the melodic material is, however, undoubtedly Puccini. Part of this musical material was re-used in Edgar: the main theme in the terzet “Ultima speme, tu sei svanita” (act 2, first version of the opera); the second theme in “Io la mano un dì macchiai” (again, act 2, first version of the opera); another idea was used in the dialogue between Fidelia and her friends “Voi? – Sì, a chieder di te passammo” (act 4).

A few measures, cut from the prelude in the final versions, were used in Le Villi. 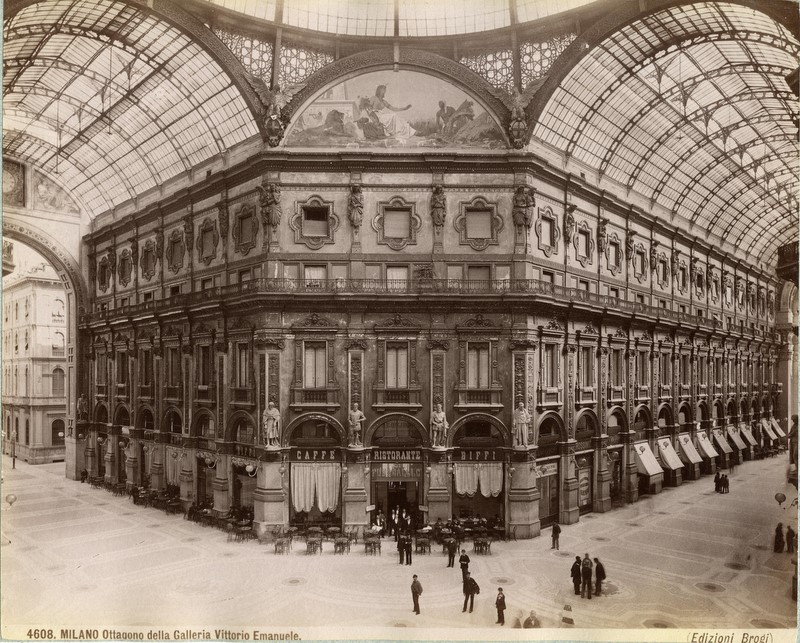 The Galleria Vittorio Emanuele II in the center of Milan, in a picture taken by Giacomo Brogi around 1880 when Puccini was studying at the conservatory

While the Preludio sinfonico was received in a fairly cold way, the Capriccio sinfonico, written the following year, was a good success: presented as his graduation composition and conducted by the music director of La Scala Franco Faccio, it already shows quite a bit of the more mature Puccini. “I felt inspired and composed it at home, in the streets, in class…I wrote on odd sheets, bits of papers, and the margins of newspapers” Puccini told journalist Arnaldo Fraccaroli (who wrote 4 volumes on the composer’s life). The Capriccio, performed three times at the conservatory, gained immediate fame and was performed in important theaters like La Scala until Puccini himself completely withdrew it, removing the autograph score from the conservatory and refusing to publish it.

The capriccio is symphonic only in its title and in the fact that it has no singers: it, however, shows plenty of operatic ideas in its music and his fingerprints in the orchestration are uncanny. Most likely, Puccini recognized he could reuse the music for an opera and didn’t want the audience to hold this against him.

And that he did: part of it in Edgar, but most importantly in the opening of act 1 and 4 of La bohème. The Capriccio sinfonico was published only in 1978 and remains today one of the most famous compositions of Puccini outside of his operatic works.

The elegy I Crisantemi (Chrysanthemums) was written in a single night in 1890 as a response to the death of his friend Amedeo, Duke of Savoy. Scored for a string quartet, it found its way in the performance halls throughout the twentieth century in an arrangement for string orchestra.

The Chrysanthemums are the flowers typically associated with death: the melancholic character of this piece was suitable enough for Puccini to be reused in the last act of Manon Lescaut.

Not a tradition Requiem as we are used to, like Mozart’s or Verdi’s: this composition was written in a short span of time to commemorate Verdi on the fourth year of his death. It’s almost chamber music: written for choir, solo viola and organ it shows Puccini’s humbleness towards the great Verdi, of whom he was the artistic heir.

Giorgio Magri, the musicologist who rediscovered it in 1972, writes that this piece “was almost certainly written in one day [14.01.1905], in one go, but was thought ahead for the choice of the text and the scoring, extremely original”. It’s a short and intimate piece, a token of appreciation for the great musician of Busseto whose Aida started the sparkle of opera in Puccini’s heart, back in 1876.

The title is already wrong, though now it’s the one that this work is known as: the original title was simply Messa or Messa a quattro voci. It’s a work that Puccini composed as an exercise in 1880, reusing a Credo written two years earlier as a standalone composition. It’s a complete mass and not just a Messa di Gloria (which includes only the Kyrie and the Gloria omitting the other canonical parts of a mass, Credo, Sanctus, Benedictus and Agnus Dei).

Puccini never published the full manuscript; he did, however, reuse some of the musical material: the Agnus Dei in Manon Lescaut and the Kyrie in Edgar.

It’s a known fact that Puccini traveled to Argentina in 1905 trying to find more information about his little brother, Michele, who had emigrated in 1888 and had mysteriously died in 1891. While in Buenos Aires, Puccini attended a performance of Edgar and was honored with some 72 banquets. Naturally, he was exposed to the local music and this is how this little piece for piano came about a few years later.

A rare lullaby written in 1912 on a text by Carlo Marsili.

This piece was written in 1916 for a catalog to raise money for the families of the victims of World War I.

Written for piano solo, it practically disappeared from the performance halls.

Puccini’s catalog counts some 90 numbers, including his 12 operas. Many compositions are exercises of a student, while others are occasional works. While most of them disappeared, others were included in his operas: the famous waltz of Musetta from act two of La Bohéme, was, in fact, composed in 1894 as a standalone piece commissioned for a ceremony in which the Italian flag was presented to a new military ship.

The march Scossa elettrica was written for a world congress of telegraphists held in Como (Italy) in 1899, for the one-hundredth anniversary of the invention of the galvanic battery.

And then a few songs, fugues, musical jokes. Also, a hymn commissioned while he was in Argentina (Dios y Patria) and the more famous Inno a Roma, wrongly thought to be written for the fascist party, while, in fact, it had been commissioned to celebrate the Italian capital in 1918, four years before the fascists came to power. The fascist party did use it more often than not and that’s the main reason behind it being completely forgotten after World War II.

A full list of compositions can be found here.

Photo of Franchetti-Mascagni-Puccini by Adert (Own work) [CC BY-SA 4.0 (https://creativecommons.org/licenses/by-sa/4.0)], via Wikimedia Commons