History of Tango: the 20th century

As we’ve seen in this post, the tango was born out of a peculiar fusion of different cultures, but for its first few decades of life it remained confined to the slums and poor streets of Buenos Aires.

The period from 1900 to 1915-20 is called “Guardia vieja”: it is the era in which the tango begins to be loved, to find its identity, to get rid of its original labels to become a national and then an international form of art. In the first years of the 1900, when the tango began to enter theaters and cafés, the typical trio was composed by bandoneon, violin and piano. Its evolution called soon for richer orchestrations and in the 1910s the trio was replaced by a sextet of two bandoneons, two violins, piano and double bass.

The tango started to attract more and more professional musicians, almost always Italian. One of the most significant figures of this period was Angel Villoldo, eclectic man, composer, singer, musician, who left works like “El Choclo” and “La Morocha”.

The universal suffrage in 1912 led to a greater integration of the classes and tango conquered a new freedom. But despite it could again be danced in the sunlight, the tango had acquired the taste of a forbidden fruit. Everyone wanted to dance. Everyone wanted to be seen dancing. It had become more popular than before and conquered high society: tango festivals and open dance halls were organized to meet the growing demand and its fame soon crossed the borders of South America.

In 1911, while in London George Grossmith and Phyllis Dare were performing at the Gaiety Theatre, the United States heard of tango for the first time in the New York Revue. In 1912, the two American dancers Irene and Vernon Castle danced their personal reinterpretation of the dance while, in Europe, Tango Café and Tango Tea Rooms were opening everywhere. 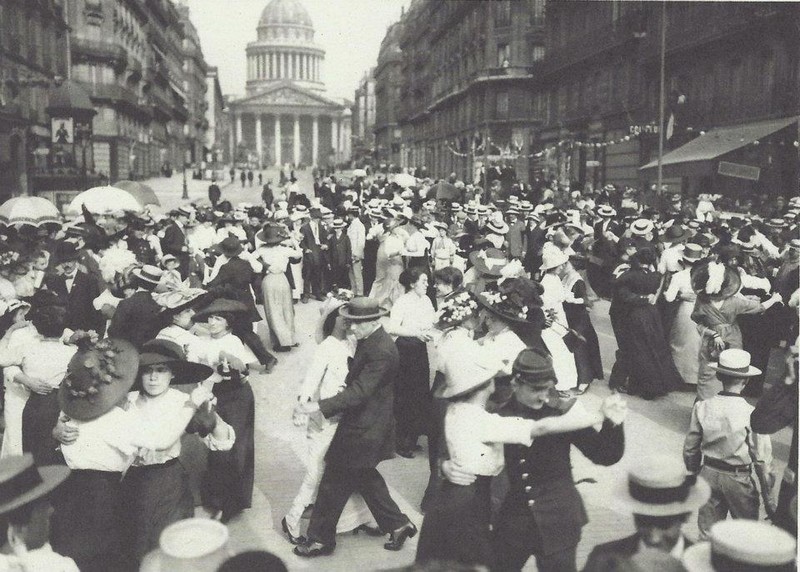 Paris became the second home of the tango, though it changed it a bit to “purify” it from the original figures that were too sensual in nature: especially at a technical level, it was, in fact, missing almost completely the typical tango improvisation, so different from the encoded and rather standardized dances present until then, and limited the sensual charge, to make it more “European”, more easily apt to the Parisian context.

Originally, the tango was danced among men only, moving then into the taverns and brothels of Buenos Aires. Adepts met in dark bars for drinking, singing and dancing in dark corners. 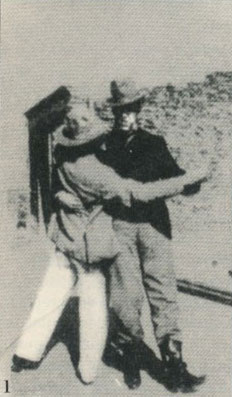 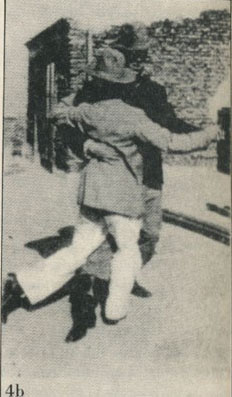 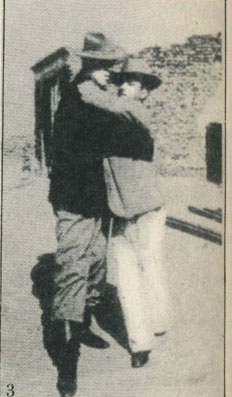 The above images are some of the earliest pictures that we have of tango, dating back to 1903 and feature a well known dancer, and friend of Carlos Gardel, Arturo de Navas. In the pictures, he is dancing with another man and the dance is labelled “El Tango Criollo”.

The sensuality and eroticism of the tango soon led to the identification of the ability to dance it well with the masculinity of the male dancer. The men exchanged tricks and secrets with one another, practicing with each other prior to show their abilities to women, trying to seduce the girls in brothels.

No one can say what city the tango was born in, Buenos Aires, Rosario and Montevideo, but everyone knows in which street – the street of the prostitutes

The daring characteristics of tango made more than a person raise their eyebrows. In 1913, the American theologian Campbell Morgan expressed a curious hypothesis suggesting that the tango was the confirmation of Darwin’s theory: tango dancing testified the regression from man to ape. At the same time, in Europe, the Archbishop of Paris, Cardinal Amette, stated that “Christians should not in good conscience take part in the tango.”

The following year, Pope Benedict XV vehemently railed against the tango: “It is outrageous that this indecent and pagan dance, which is killing family and social life, is being danced even papal residence“. The tango spread across Europe, causing problems wherever it was danced. In 1914, Kaiser Wilhelm II forbade his officers to dance the tango in uniform considering lascivious and contrary to public decency. The police chief of Monaco of Bavaria banned the tango once and for all from all spring festivities.

Opposite to the “Guardia vieja”, the period from 1925 to 1935 is called “Guardia nueva” – a period during which dancing almost died out, because musicians began playing around with the phrasing, harmony and the melody instead of focusing on a steady beat. People were buying records and listening to tango on the radio and dancers were not the primary concern. However, in the 1930s, the rhythmic characteristics of tango came back into fashion, thanks especially to Juan d’Arienzo.

The “Golden Age” of tango, roughly between the mid-40s and the mid-50s, saw the best orchestras playing until morning, people dancing and engaging into rivalries between neighborhood: dance competition, on different variations of the tango, would often end up in riots ended by the police.

The post World War II military dictatorships changed the rules of Argentina social life and tango dancing slowly declined in the face of curfews and clampdowns on public gatherings. Tango music developed a rich new concert-hall tradition, more and more removed from the dance. The culture of late-night dancing went underground, and nearly all the regular milongas closed their doors.

The return of democracy, after the Falkland war in 1982-1983, brought a new wave of interest for tango – an interest also fueled by the increase popularity of one of the greatest interpreters of tango of all times, Astor Piazzolla.