From here you can quick jump to the different sections of this post, which include:

Let’s start with the myth of the Tango: Carlos Gardel. 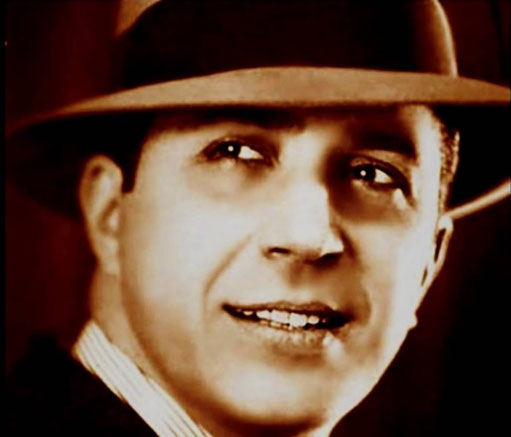 The dispute over the his birthplace is still open; and we do not know how the accident that caused his death occurred. He died young, and as it often happens in show business, he has become a myth. Gardel is the singer who most of all remained in the heart of the Argentinians.

He began his real career in 1917 when he recorded his first Tango, Mi noche triste. His voice, his charisma and his physicality, made him loved and revered, envied and admired. By 1930, Gardel is already a star both in the music and in the film industry. Particularly important is the figure of Alfredo Le Pera, his close collaborator, lyricist and scriptwriter of many of his films, who died with him in a plane crash in 1935.
As evidence of the fact that Gardel was and will always be a myth for the people of Argentina, in the cemetery where he is buried, there is a bronze monument of natural proportions: this statue has every day a red carnation in a hand and a lit cigarette in the other. To this day, the author(s) of this ritual remains a unrevealed.

A special mention deserves Alberto Castillo, nicknamed “El cantor de los 100 barrios porteños” (“the singer of 100 neighborhoods“); he graduated in gynecology only to please his father, but once he graduated he began to sing. Castillo had the merit of the dusting up, in the 1950s, the candombe rhythm, linked to the origins of Tango, and to live the Tango as a genuine national product, for this reason worthy of being exported.
Among instrumentalists, special regard deserve Osvaldo Pugliese and Anibal Troilo.

Osvaldo Pugliese (1905-1995) was a piano virtuoso: he started early to perform and tried to form his ideal orchestra. His skill and peculiarity lied in seeking new ways of expression, innovating without neglecting the Original Tango; he succeeded very well in his 70 year career, bringing a whiff of fresh air to the Tango music. 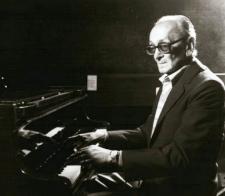 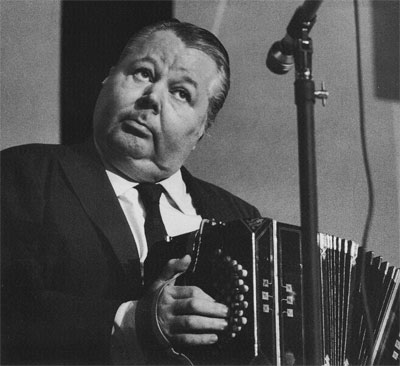 Anibal Troilo (1914-1975) began playing the bandoneon at a very young age. In his long career he managed to surround himself with great musicians and great singers. His biggest accomplishment was probably the successful merge of Tango-Canción with dance.
A virtuoso of the bandoneon – one of his nicknames was ‘El Rey bandoneon‘ (‘The bandoneon king‘) – he was also a renowned talent scout: one of the first people to hire a young Astor Piazzolla in his orchestra.

Particularly important is the father of Tango: Angel Gregorio Villoldo (1868-1919). He wrote picturesque and satirical lyrics – an insight of the times he lived in – the most famous being La Morocha and El Choclo (see this post).

Another well-known lyricist is Enrique Santos Discepolo (1901-1951), famous also for his definition of tango: “Tango is a sad thought being danced.” His lyrics are blue, polemical and full of pessimism, but so full of human charge and pathos that every Argentine at the time knew them by heart. Among his most famous compositions are Cambalache, Uno, Yira yira and Cafetín de Buenos Aires.
The unforgettable artistic duo formed by Carlos Gardel and Alfredo Le Pera lasted only three years, but gave light to some 28 songs. Trying to determine if it was Gardel who stimulated the imagination of Le Pera or viceversa is trying to work out the chicken and the egg riddle. This symbiotic partnership left works like Mi Buenos Aires querido, Por una cabeza, and Volver.

Last but not least: Horacio Ferrer (1933-2014), founder of the Academia Nacional del Tango, who formed a very fruitful collaboration with Piazzolla in the 1960: Balada para un loco and Balada para mi muerte remained for months at the top of the list of most popular songs.

A  bit of attention needs to go to the women of Tango. First of all Herbil Eloisa, a frontrunner, born in 1842, died at 101 years. Cultured and aristocratic, Eloisa performed at the Teatro Colón in 1872 with the habanera Vente in Buenos Ayres and composed different tangos criollos (What, no calotiés, Y a mí qué, Que sí que no). In 1889 she wrote La multa, taken up years later by Villoldo.
Among the first female singers of Tango: Pepita Avellaneda (an alias for Josefa Calatti), who, in 1900, made her appearance in theaters and cabarets with a guitar and men’s clothes. She quickly became a star, but just as quickly (and inexplicably) disappeared from the stage, dying in poverty at age 67.
Moving to Europe we need to remember Flora Rodriguez de Gobbi, wife of Alfredo Gobbi: the couple toured throughout Europe with Villoldo in 1903, singing and recording the first tangos in Paris.

Few were the instrumentalists of the Tango, but certainly worth of mention is Francisca Bernard, ‘The Paquita’, the greatest woman bandoneonist of all times. Magical was the trio she founded with a very young Pugliese at the piano and Vardaro at the violin.

Other voices who became popular are Tita Merello, Mercedes Simone and Libertad Lamarque, daughter of an anarchist, star of some seventy films and blessed by an unmistakable voice.